Kris and I took a late afternoon fishing trip.  We fished from 4-8pm in mostly 140 to 180 fow. It looked a bit like amateur hour as we ended 1 for 3.  It wasn't the lack of fish that made me feel like a beginner, it was more the manner of bringing in the fish.  The first hit cam 100 down on a magnum blue and white spoon with eye.  Soon after hitting it surfaced and proceeded to rip out another 500 feet of line.  The line on the reel was nearly gone so my wife proceeded to put the engine in and out of gear so that I could make a little progress on the fish.  This still wasn't enough help, so she proceeded to bring in 4 more lead lines and one other rigger so that we could stop the boat and land this monster/fresh water shark.  Unfortunately, it became evident that    the fish was foul hooked in the belly and creating an enormous amount of drag.  We boated it and the fish wasn't a monster at all, but a healthy 16 lbs King. 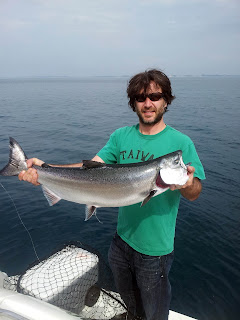 Later, we got two of lead lines tangled, one of which was a core and a half.  As the two of were attempting to undo the tangled mess and save the lead lines, we got a fish on the core and a half - I'm sure are constant jigging of the line made the dark green/black/magenta Pro King spoon look a bit more appetizing. I then proceeded to hand line in this nice king.  Because of the fiasco, Kris thought it would be better to film the nonsense rather than take the net.  So now, I have the leader in one hand, the net in the other, the 8 lb King in my sight, and a videographer at my side.  Right before I make my move with the net, the king takes one last dash out and brushes the down rigger line and the hook pops off.  The fish was gone and all I could do was to rattle off a few choice words expressing my disappointment.

It was a fun afternoon and the Lake was amazing!

If you have a Salmon Fishing Report for Lake Michigan please click on the "Comments" link below. Fish On!
Posted by Eldean Shipyard at 10:20 AM