The Big Red Tournament was a lot of fun but once again the fishing, for the most part didn't go our way. Team Rhino (Mark, Marc, Wade, Paul, and Tony) was in right in the middle of the pack after day 1 when we caught 3 smaller steelhead and a 12 lb king.  The action was on 4 different poles: 3 lead lines with spoons and one downrigger with a meat rig and we ended 4-6 with the action coming in 70-85 FOW.  Day 2 was another story where the fishing was more difficult because of the wind and waves and the fish didn't seem to be biting.  We only caught 1 steelhead and couldn't get much to happen including marking very many fish and spent our time in the 70 to 120 foot range until the tournament was cancelled an hour early because of big waves.

On Friday I went out and practiced fished with Capt. TJ on Bending Limits.  We had a difficult time targeting kings in the first couple hours so we went back to targeting Lake trout and before noon we had 10 Lakers, 2 Kings, and a Steelhead.  Our biggest fish was a 15 lb king that we caught after snagging somebody's copper that had broken off.  After reeling in the copper, TJ then hand-lined in the second copper to find a freshly broken off King.  Bending Limits and a few other of the Pro boats finished in the top 10 in the Big Red and it was definitely due to their ability to target Lake Trout and fill up the cooler. 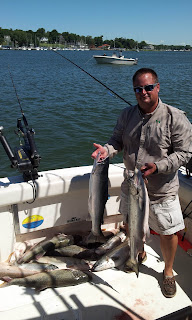 If you have a Salmon Fishing Report for Lake Michigan please click on the "Comments" link below. Fish On!
Posted by Eldean Shipyard at 7:19 AM